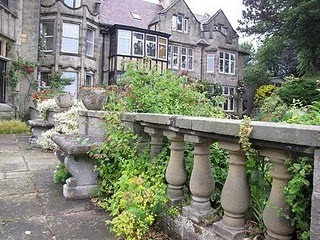 —Photo by Ross Eldridge
MY LOTTO DREAM
When I win the Lotto  I would almost certainly buy a large home with lots of space between it and any neighbours. But I would have people living in it with me (a valet, cook, maids, and a gardener) and be open to visitors. Come and spend the summer. The winter. And I know just the place.

On a hilltop above the Northumberland seaside village of Alnmouth there is a very large and rather antiquated building that has some history. It has been a private home, a club, a small hotel, and it is now a friary. The Friary of Saint Francis is a retreat for a better class of retreater, I’m guessing, having seen some awfully posh sports cars on the gravel in the forecourt. The few friars wear long, brown, monkish robes and sandals, but look quite well-off, a better class of friar.

The Friary building has been added upon, and there are portions with a religious flavour, but it is, at heart, an enormous country house overlooking the north end of Alnmouth Beach. There must be four floors and masses of windows facing the North Sea. The view alone would be worth a small fortune. When I win the Lotto, and I have a large fortune in mind, I would make the Friary an offer so enormous that they could not resist.

I’d leave the basic outside structure of the Friary unchanged, but I would remove all of the Christian iconography. The inside would be completely renovated. I’d want my visitors to have all the comforts of a hotel on Park Lane, luxurious accommodation with a spectacular view. And when the storms rage in from the North Sea, my winter guests might warm themselves at an open fire and watch the surf smashing onto the beach and WW2 fortifications below, or read in a recliner chair, a blanket over the knees for extra warmth. One miniature dachshund to maintain order. Two to run riot.

I might be some measure from the nearest house, but with my Lotto money I could bring the neighbourhood inside, bring my friends in. There would be a level of comfort, some nice touches: art, music, books, fine food, company, and conversation.

I’d move my mother (who has been a ghost these past 18 years) into my Lotto Dream home. It would be nice to have her in the flesh, but with time and times rolling on, her spirit would be welcome, perhaps walking a gallery. Calling out, as she did when she was ill and worried in bed: “Ross! Ross! Are you there?” I’d tempt her ghost with a dish of bread-and-butter pudding into a well-lit room overlooking the Sea. I’d read a book, and my mother would stand at the window for a spell. A magic spell. The sun shining through her. And a mini-bus load of friends arrives that evening. Dinner, then charades, perhaps cards or Scrabble, and somebody will play the piano and sing something by Cole Porter. “The girls today in society go for classical poetry. So to win their hearts one must quote (with ease) Aeschylus and Euripides...”

Ross Eldridge lives in a tiny North Sea town on the coast of England near the Scottish border. He reads a good deal, has a go at photography, and researches family history. Ross has written a weekly newspaper column, but is now content to blog at http://barkingmadinamblebythesea.blogspot.com/, dedicated primarily to his little dog, Cailean.