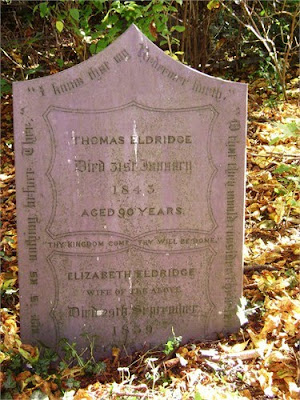 Time—The Greatest Thief of All
Few things are more deceptive than memories.
—Carlos Ruiz Zafón
A while ago, on 29 September to be exact, I noticed the date, and there was a tintinnabulation, one that I had, apparently, missed the day before. I do not doubt that I saw 28 September 2009 any number of times. So what? My mother died on 28 September 1992, and this was the first year that I did not think of her passing when I saw the day and month. Seventeen years to forget? Or was it just seventeen years to not remember?

On Tuesday 29 September I thought: "Good grief! Yesterday was the anniversary of my mother's death. I missed it."

Perhaps if I lived in Bermuda where she is buried, I would have planned a visit to her grave days or weeks beforehand. Some day when she came to mind and I'd have remembered those last hot days of the summer of 1992 which my mother spent in the hospice as the cancers crawled through her body and, at about three o'clock in the afternoon on 28 September, reached her fingertips. They turned dark purple as I held onto them in the hour before she stopped breathing.

I remember that remarkably well.

The only sound, a loud gasp, from the older of my mother's brothers, also in the room. Not forgotten.

I haven't a single photograph of my mother now. However, I can picture her in quite a few photographs that I grew up with, taken in her infancy and through the sixty-something years she lived. As I sit here, I cannot see her in my mind from general times in her life, as a person unposed, because her life, as it affected me, was a photographic plate exposed for about forty-two years (my age when she died). Except for that final moment. I can see her just dead on the bed. Eyes wide open. Back arched slightly. Her hair had been shampooed and cut by a hairdresser friend the day before and my mother looked quite tidy.

We've had several television programmes this past fortnight on the subject of death. Documentaries on our attitudes towards death and dying over the centuries were particularly interesting.

Cremation has only really been a going concern in the UK for about 120 years. Acceptance by some of the major churches, like the Church of England, is quite recent, but most dead folks here are cremated now. People still seem to look forward to a funeral service of some sort. Funeral homes now do most of the work. My great-grandparents would have been laid out in their coffins in the front room at home. Family and neighbours would have washed and dressed the body.

It is clearly becoming increasingly difficult to pop around to the graves of family members when the anniversaries of their deaths (and Easter Sunday) come around. I'm looking forward to being cremated, with no funeral service, and scattered off in the wild somewhere easily forgotten by a stranger.

Will anyone think of me when the anniversary date rolls around? I'm not sure that I give a hoot. I'd much rather somebody thought of me while I was alive to enjoy it. Perhaps a postcard?

Ross Eldridge lives in a tiny North Sea town on the coast of England near the Scottish border. He reads a good deal, has a go at photography, and researches family history. Ross has written a weekly newspaper column, but is now content to blog at Barking Mad in Amble by the Sea, dedicated primarily to his little dog, Cailean.