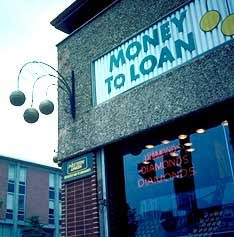 Pawn Shop
You hate that you got to the point where
you double-check your order at the Taco Bell
drive-through. That's what happens when life
forces you to take your mother's wedding
dress to the pawn shop, hoping you'll
save up the money to repurchase it.
It wasn't always this way. Once upon a time
before you'd ever heard of Kierkegaard, you
stood at the lake and prepared to leap, as Pachelbel
blasted his cannon, telling you, a dude, to dress
up like the bride of the Sea God and walk
toward your groom. You may have gotten wet,
but the water kept you warm till you got out
and were greeted by the cold wind. Years later
you'd hear Jimi Hendrix's rendition of the
national anthem and learn that distortion
has a way of wringing the muck from a sponge
so that it's once again light and airy,
even if it's still a dead thing. Eventually,
you'll head back to the pawn shop,
not to reclaim what was yours
because another now wears it, but to
understand why you gave it up for so little.

Matt Ryan's poems have appeared in Pindeldyboz, Opium, Word Riot, and others. He is a Pushcart Prize nominee, editor for Best New Writing, and English professor at Concordia University, St. Paul. He holds the MFA in Writing from Spalding University.