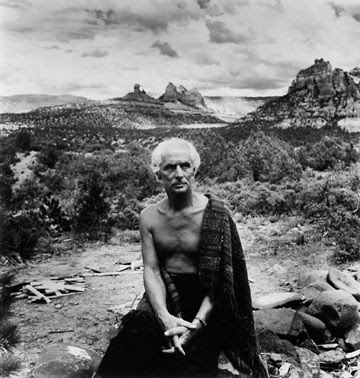 Publicity photo from MAX ERNST — MY VAGABOND LIFE, MY DISQUIET

He talks to the rocks. He tells them who he is and he’s impressed by their stoicism. He hasn’t lost his good looks but the Navajo women aren’t interested in the painter who sits half-naked under a Jojoba tree and asks about spirits and sauces because he likes his potatoes with thick sauce like Germans do. This is, for him, a sign that he’s alive. Nobody here has heard of him but they believe him because he can draw like a god. One of the women tells the others: his lines come alive like snakes. He shows them his ankles where the painted serpents bit him. He bled red ink. He calls every Indian ‘lady’. One of them reminds him of his mother another of a whore in Berlin. He looks at the sky long and hard as if the sky could come down and settle on his canvas like a tamed animal. His dreams, at night, get up and walk around the compound all by themselves, making up landscapes.

Marcus Speh lives in Berlin, Germany, where the tradition of Dada and surrealism are still strong. He curates the One Thousand Shipwrecked Penguins project, serves as maitre d' of the kaffe in katmandu and has got nothing to flawnt at http://marcusspeh.com