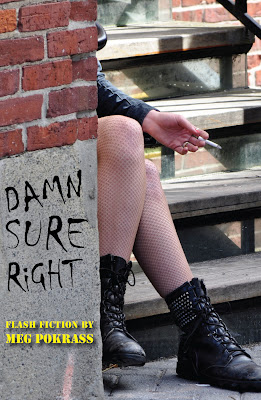 
John does not own a wall mirror. “Sorry,” he says “we can use each other’s eyes to know we are human, okay?” He does not believe in reflections.

There are drops of semen on my lips when he says he loves me for the first time, and tears. I do not dry them.

Twelve hours after my husband David and his bike were destroyed by a truck, people distributed hospital smiles. My cheeks smiled back, bile gathering inside my throat.

Congratulations, you are now a bird with no tree.

They’d thought he was dead, then changed their opinions and had something to say to me when they found me sitting against a wall in the waiting area hallway. He was alive. But not his spine.

“You may have heard it wrong the first time,” the hopeless/happy face of the doctor/nurse said. Someone held my hand, my hands.

One of the many nights, walking alone in midtown at two a.m., I was held up at gunpoint. A group of youths with hanging jeans swimming around their knees blocked me, squealing, “who the fuck said that?” They took my money, and one of them poked my nipple. I felt as though I were watching it happen a short, safe block away.

John owned the Ice Mart where I bought the milk. Every night he was there, listening to music on his iPod, talking to the few slumping, tired customers. He always stopped talking when I came in, said, “hello, nightingale”. The night I was held up, John looked at me very hard… but didn’t ask what had happened. He offered me Kahlua, and I cried a little. We sipped from the same small bottle — watched each others lips.

Maybe my cell phone knew something beforehand, because it vibrated often and for no apparent reason.

Now, John vibrates, I vibrate. I crave his lips, his eyebrows, the smell right below his stomach. What it makes my body feel, so stupid, so young.

David molds delicate cats and birds with colored clay. He can use his fingers very well now.

“His fingers do the walking!” the day nurse says. This nurse, Jill, a handsome and strong girl, has full breasts. David’s eyes rest on the window.

Behind his wheelchair, on the wall – a photo of us newly married. Goofy, grinning. Redwood trees. I am wearing the felt hat with the little pink cloth rose. David always said it made me look like Clara Bow.

“Okay, well, I’m off to finish up some stuff at the office and grab some supplies,” I say. “David, you take care of this fine girl.” Jill is used to this line, nods.

“Sure thing, and David will be very happy to see you tonight,” she always says.

I kiss him on the head before I leave. He says, “aaaah, aaaaah.”

His lower body is covered with a thin blanket, and this way, I do not have to see.

Meg Pokrass's first collection of flash fiction, Damn Sure Right is available at http://www.press53.com/BioMegPokrass.html. Meg writes flash fiction, prose poetry and makes story animations. She serves as Editor-at-Large for BLIP Magazine (formerly Mississippi Review). She designs and runs the Fictionaut-Five author interview series for Fictionaut.  You can read and learn more about Meg at http://www.megpokrass.org.

Meg, brave story. Sex and love must be fully explored in literature, because they are central, and difficult to understand. I am looking for more of your stuff.