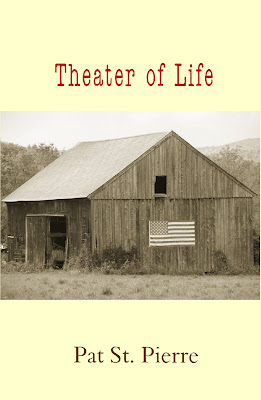 I could not tell what your eyes saw
But somehow
I knew you were aware of the final summons –
The writ that is presented to all of us.
I was fearful of taking that last step
With you. Your eyes darted from side to side
Mine held steadfast.
We were both terrified of the unknown
Our eyes met for a second.
I reached for your hand,
And in the trance,
Everything became as clear as a summer day.
Your final gasp and my moan became indistinguishable.

—From Theater of Life

Pat St. Pierre lives in Wilton, CT. Her work has appeared in Boston Literary Magazine, The Shine Journal, Flutter, Wind, The Litchfield Review, among others. She blogs at www.pstpierre.wordpress.com. Theater of Life is available from Amazon.com.