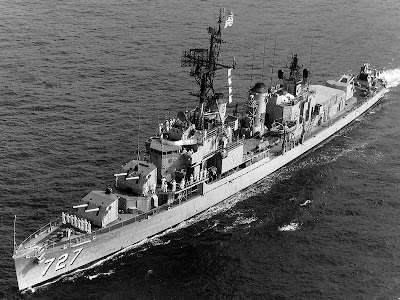 Once upon a time, far out in the Pacific, I stood the evening watch. No ships pocked the radar screen, we planned no course change, no enemy lurked nearby. But I'd glanced at the Nautical Almanac, and soon I broke the news.

As dusk gave way to darkness, I explained. In a few minutes we would see the "occultation of Venus." The helmsman, the signalman, one or two others on the bridge, listened and looked at the sky far off to port, where close together shone a bright star and a crescent moon.

Some of the men didn't know our planet has eight companions—
only seven now, I gather, but I haven't followed the debate. One man seemed surprised to hear that the earth revolves around the sun. Several of those guys had never finished high school, but they were smart. At any rate, they listened. Why not? There was nothing else to do.

"Holy shit, Mr. J., you ought to tell everybody, on the PA system."

So I did. And clumps of sailors poured out of the passageways below to look up while Venus reluctantly moved toward annihilation. Soon the sky painted a Turkish flag, and then, in an instant, the star disappeared.

"Wow!" The signalman stared, mouth hung open, while the heavens ignored us all.

But a few moments later Luna disgorged her prey. Venus popped back into view from the far side of the moon, and from the deck below I heard voices: "Well, goddamn!" "Hooray!" Somebody applauded. We breathed again. Once more, the Evening Star continued the slow and certain completion of its appointed rounds. And so did we.

Carter Jefferson served on the USS De Haven, a destroyer, during the Korean War. He has published a biography, numerous newspaper and scholarly articles, book reviews, short stories, and essays, and is a member of the Internet Writing Workshop. His website is here: http://carterj.homestead.com/