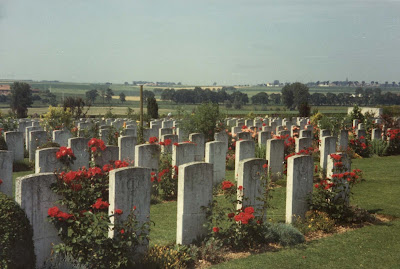 The War to End All Wars
My little dugout, my home these last two or three days: I am in a narrow trench about four feet deep, and my dugout is a hole scooped out of the trench side and roofed over with a piece of corrugated iron. When, at night, we settle to rest, and hang up oilsheets at the openings, and light our candle, we are quite comfortable, and happy. —Lance-Corporal Frank Earley, 1 September 1918.

Earley was killed the next day, aged 19.

I didn't learn of the death of Lance-Corporal Earley on the Western Front until I read the Imperial War Museum publication, 1918 - Year of Victory, by Malcolm Brown. I was looking for information on my grandfather's older brother, James Arthur Lancaster, killed the same day fighting alongside the Canadians on an offshoot of the Hindenburg Line.

There are only five sentences in the book about that battle. I don't know how long it lasted or how many men died. Were there any trees left near Arras by 1918? Was it raining? Had the Tommies had time for breakfast? Were prayers held? Did anyone sing God Save the King? Did anyone try and run away?

Did my mother's uncle die immediately? Was he bagged or boxed? Was he missed? He was 24 when he died fighting for his country; since he'd volunteered in 1915, I imagine he did care about his country.

I've never seen a photograph of James Arthur as an adult, but there's one taken in about 1905, picturing him, then eleven, his sister Maud, about nine, and my grandfather, William Lancaster, four or five. The boys looked much alike, their hair freshly cut, dressed in identical fine suits that may have been hired for the occasion. The boys looked a bit flash, but Maud was dressed in many layers of unattractive cloth, set off by drooping ringlets. That sort of plain takes some work.

I have a number of James Arthur's military records now. He was sent to France in October 1917. One of the last papers says he was In the Field. And on 23 September 1918, someone wrote Killed in Action and stamped and signed the page.

My great-grandparents received word of their son's death at home in Harle Syke. Who answered the door? It was just a few weeks before the war ended.

Another document, dated 4 May 1919, has my great-grandfather signing for medals awarded to his dead son: The War and Victory Medals. I have no idea where they might have gone.

The exact whereabouts of James Arthur Lancaster's grave was not known in my family until five years ago when the Commonwealth War Graves Commission advised he was buried in Wancourt British Cemetery in Northern France, not far from where he died. His name is on two memorials in Harle Syke, one by the town's bowling green. I wonder if he bowled.

On 11 November 2008, we commemorated the 90th Anniversary of the Armistice that ended the War to End All Wars. Two Royal Marines were killed in Afghanistan that day, squabbling with Afghans over some dusty real estate they want for themselves and we wouldn't know what to do with if we could take it from them successfully.

Many more have died since. So it goes.