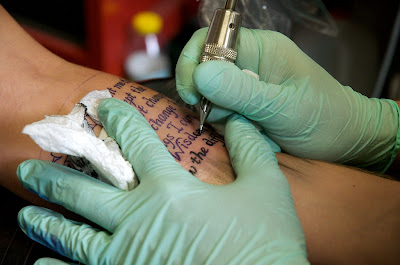 Coffee Break
He wanted coffee on the drive back to the halfway-house. I pulled into a shabby variety store and watched as he went in to order an extra large with two shots of espresso.

His belly stretched the 3XL tee shirt that hung over long, baggy shorts. He still had a wiffle, a no fuss hair cut, but his face was full, double chin fringed with a neat goatee. What happened to my skinny little boy?

He stood beside the truck to smoke a cigarette before getting back in.

When he flicked away the butt and huffed into the passenger seat, setting his coffee in the cup holder to cool, smoke still flowed from his nose.

He saw me glance at his tattoo, the one on his left arm, the grim reaper.

"You don't like my tattoos, do you?" He rubbed a hand fondly over the length of the figure on his fleshy forearm. His nails were neatly trimmed, but needed a good scrubbing like I used to give them each night before supper.

"Mothers never are." He chuckled.

He stretched out his right arm where the sharp tip of a cross pierced a heart. His shirt hid the wolf on his shoulder and the thorns encircling his right bicep, but on his neck I could see the skull with a rose in its teeth, a ghoulish flamenco dancer with a wicked grin.

He pulled a lottery ticket and a quarter from his pocket, and scratched, fingers trembling, pausing slowly after uncovering each number to blow the scrapings away. His breathing was noisy, labored sounds made by a heavy man who's smoked a pack a day for twelve years.

"Whoo hoo! Fifty bucks!" He looked at me, more light in his eyes than I'd seen since he won the fifty-yard dash in fifth grade.

He grinned, then, ever sensitive, said, "I know, Mom. You think I should save my money."

"I should," he said, getting out to cash the ticket.

Ruth Douillette is a freelance writer and photographer. She's an associate editor at the Internet Review of Books and blogs at Upstream and Down.