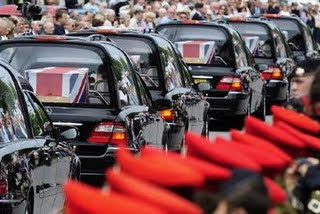 Live, We Watch the Dead
A few weeks ago I watched the eight hearses carrying the bodies of eight British soldiers, all under the age of 30, passing through the little village of Wootton Bassett in Wiltshire. These lads, three of whom were only 18 years of age, were killed in action in Afghanistan. The last eighty soldiers returning to England's green and pleasant land in coffins draped with the Union Flag were driven slowly through Wootton Bassett, from a nearby airfield on the way to autopsies at a hospital in Oxfordshire. Up until then there might have been one, two or a very few hearses, and the processions would stop at the War Memorial in the village's main street for a minute's silence. The local shopkeepers and businessmen and pedestrians have been coming out for the passing by in greater and greater numbers.

This time, with so many of our lads flag-draped in their boxes making the trip, thousands of viewers turned out, coming not only from the vicinity, but from many parts of Britain. The press was there. The live cameras were running. I watched it happening on the telly from the comfort and discomfort of my front room. The crowds were said to be eight-deep, but I counted and it was more than that. I saw a lot of young people weeping and hugging each other; it was the old-timers in the crowd who remained stoic in the face of all that sadness. Old-timers under their sunglasses.

The closest I have come to the art of war was a spell in the Cadet Corps when I was at grammar school. I hated the experience. I did take part in a re-enactment of the Battle of Crécy in a school history class, which was interesting because my direct ancestor, the Earl of Stafford, was a commander in the English army at Crécy.

The war in Afghanistan is, I'm afraid, a black hole. It can only suck men and machines in and spit them out, ruined and destroyed. The War on Terror is a religious war; it is the same war that gave us the Crusades and the reaction to them. Jerusalem may be the navel of the world, but it is the centre of all evil as well as the focus of religious experience. I'm afraid the Christian Right and the Jewish State are just forms of Talibanism. Our Taliban is better than yours.

We in England and America don't really want fuzzy-wuzzy Islamist things in our towns and villages, not if we're being honest. Why in the world do our leaders and churchmen think we need to convert the world to Western Democracy? To the Pepsi Generation? To MacDonald's? To Starbucks?

I felt a great sadness watching the line of hearses make its way through Wootton Bassett on my television. The crowds were so extensive, and the number of long, black vehicles so large that they did not pause at the War Memorial for a minute's silence for the first time. The memorial, like so many, many others in Britain and around the world is engraved "Lest We Forget."

I think they should have made that stop, taken the minute, taken the chance that more hearts would break. Some things one really should not forget.