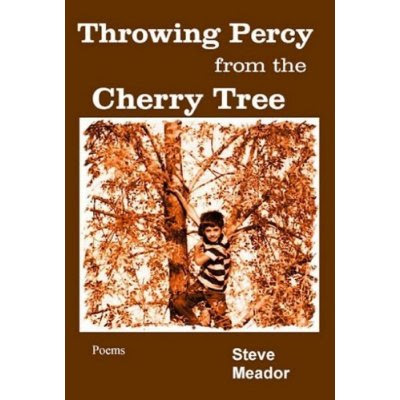 Sign Language
There was never a conversation with Susie,
no grunted words slung from a passing swing
or breathless banter rolled from the high
end of the teeter-totter.

There is no voice to recall, only a plaid dress
draped over a white blouse. The same dress worn
day after day, which murmured its own words
beneath the dark tongue of her ponytail.

Near the end of the year, after I had pissed
my pants because someone hadn’t flipped
the red circle hanging on the restroom door
to green, Susie finally had something to say.

I looked across two aisles and she pointed
her finger at me, then touched it to the corner
of her eye. She repeated the motions. Slowly
spreading her legs she lowered the finger
and aimed it between them, at the yellow panties.

I have never read Robert Fulghum’s book,
but I damn-well know that he didn't learn
everything in kindergarten

—From Throwing Percy from the Cherry Tree

Steve Meador’s book, Throwing Percy from the Cherry Tree, was nominated for a National Book Award and a Pulitzer. His poetry is widely published and appears in Prism Review, Two Hawks Quarterly, Quicksilver, among others. He has several Pushcart nominations.