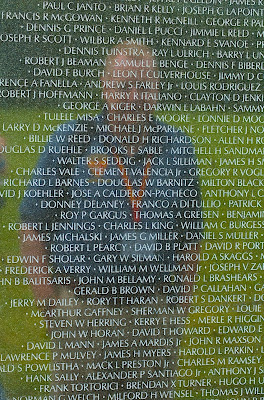 Memorial Day Tears
My husband and I sat on the patio at dusk, rehashing the day.

"Are we going to the parade tomorrow?" I'd asked. It was Memorial Day.

I mentioned that there would be a ceremony at the cemetery. "Taps" would be played in honor of the dead who'd died serving the country in war.

"That would be tough for me," he said.

"It would be too emotional?" I asked, tentatively. He nodded.

He'd been a Captain in the Marines. He was going to get drafted, so he signed on to become an officer. He was sent to Vietnam after Officer Candidate School. Then, Camp Lejeune after Nam. I really don't know much more than that.

He came home in 1968. I was in still in high school. We didn't know each other then. We met twenty-four years later. He would never talk about Vietnam. But he choked up watching war movies.

I tried to get him to open up. I felt shut out. What had happened? What was it like? Why would he not share with me? I loved him. I would never hurt him. I could ease the pain he'd buried.

But he wouldn't talk. Or couldn't. I let him be. For years.

But this night he seemed open. So I asked what it was that made it so difficult after all these years to talk of the past.

This is when the grenade split the air between us. My husband accused me of tossing it, but I didn't even know I'd held it, let alone pulled the pin.

This is a subject that stays buried, he said. I need to understand. I can't ask questions. He won't answer. It isn't that he doesn't trust me to be gentle. Yes, it might help if he talked, but he won't. He stormed into the house.

I sat alone feeling hurt. His hurt was bigger though, and he had every right to keep his experience to himself.

When he returned, he spoke haltingly of learning that survival meant making decisions, quick ones, life or death ones. Tough ones. He said sometimes those decisions were made "for the greater good." He said he was in charge of his men; it was his responsibility to bring them through alive. But some didn't make it.

We sat silently watching a goldfinch at the feeder.

The next day we went to the town common for a simple Memorial Day ceremony. We stood with others in front of the memorial with names of local men who'd died in war from WWI to Vietnam. Dignitaries spoke. Veterans spoke. There was a gun salute, and a bugler.

I stood beside Bruce. He'd begun wiping silent tears long before the bugle blew "Taps." I put my arm around him, grateful that his name was not on the monument. That was all I could do.

Ruth Douillette is a freelance writer and photographer. She's an associate editor at the Internet Review of Books and blogs at Upstream and Down.