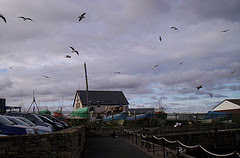 
Some years ago, I wrote a newspaper column that tended to be about days gone by, which were sometimes the good old days of my youth, sometimes about the travel I'd managed when my health and finances permitted, about people that I'd met, books I'd read, things that influenced me, the shitty experiences of childhood, conversions and diversions. My therapist thought I was getting all the past out of my system. I kept a journal for over twenty-five years, scrapbooks as well, and photo albums. Everything was on paper, somehow. As we carry the past along with us, perceiving time as we do in these dimensions, I hardly expected to get everything out of my system!

Three years ago I took all my journals to an industrial incinerator plant, along with my scrapbooks. So much for what I did in 1980; so much for the newspaper clipping of my mother's funeral notice; so much for important telephone numbers; so much for jokes that were so funny when I heard them that they had to be written down; so much for my thoughts on 11 September, 2001; so much for theatre tickets, and an address blotchy on a beer-mat, and a coin I picked up that I did not recognise. Into the fire.

I left my photo albums (and I'd been the keeper of the family photographs among my siblings), my personal papers, my newspaper columns, my reference books and notes, everything that I'd written, in an old cargo container in a damp field in Bermuda. When I turned my back on it, I knew that I'd not pay the storage fees after the first six months, and I didn't, and that was three years ago. Those things have gone. Apparently, as of three years ago, I'd pretty much dumped the baggage of my past, mentally, and the physical followed.

Back in England, I found I was unable, couldn't be arsed, to write about schooldays and fishing off the rocks and climbing Mount Pisgah on Beaver Island, though I was vaguely conscious of those times. Instead of panoramic views of driving through the Grand Tetons that just go on and on, I have a little, the smallest, Post-it Note reading "Saw the Tetons". Enough seen, enough said.

I'm tending to write about the moment, or at least last night or a day or two ago. I've taken up photography, I see something interesting, camera always at the ready, I get my snapshot, and I write about it. Or delete it. I don't save it.

And, in the night, in the last few hours before sunrise, my mind races. Something I saw the day before. I have a tiny torch, the sort that one might attach to a key ring, and I reach for it, my biro pen, and a jotter pad (they are scattered all around the flat), and I write down my great thoughts. Light out. Another thought. Light on. And through the night. Light off. Light on.