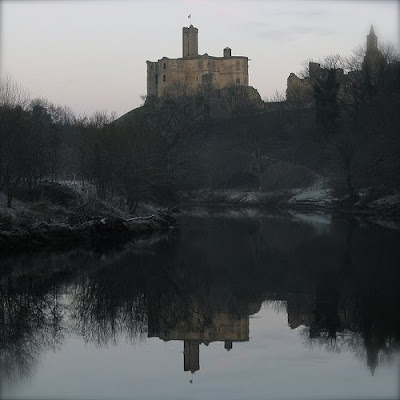 
Winter arrived, the way it does in Great Britain.

One day the poets are out raving about the daffodils, and the weather and the scenes are picture-postcard and calendar-photo perfect.

Warkworth Castle is surrounded by golden blossoms. Songbirds are flying in from Africa. The sky is an exquisite blue that defies the palette. Our noses have stopped running. Off with the overcoats. Restaurant doors are open and the fragrance of food wafts into the street. Pretty girls and boys are everywhere.

And three or four days later the poets have to run for cover as the rains set in. Rough winds shake the darling buds of May that hadn't been shaken right off the branches in April. The people start coughing, the birds start wheezing. This is the real spring.

Right about then the summer flooding begins. The leaves hang on, however, even when the uprooted trees float down the rivers and across the tidal marshes into the sea. The two days of summer, the balmy 20°C, are remembered well as we get the sweaters out in July and when the anoraks come down in August.

A flight of birds, a mad scramble really, heralds the end of summer. A few days of glorious autumn colours and it's over.
One good thing at this point in time is that the great outdoors shops have all their unsold camping gear on sale, just in case you think it might be fit to go out and enjoy the countryside and being close to nature next, uh, summer. Now is the winter of our discount tents, sleeping bags and backpacks.

Last year, before Halloween, we had blizzards in Scotland, moderate snow in Wales and the Midlands, snow flurries in London (the earliest since 1934), and then we had about 36 hours of on-and-off hail in Amble by the Sea. Not your picturesque hail, this was heavy-duty stuff which woke me several times in the night with the clattering on the windows.

By early November, I was bundled up with the central heating turned on. I drank a good deal of hot tea to keep myself comfortable, which is not to say warm as toast. Even toast doesn't make me warm as toast. In fact, if you've been to England you know that toast is prepared the night before and served at breakfast...cold!

It's Global Warming, of course, that is responsible for this frigid weather. Thank God we don't have Global Cooling, or we'd really be fucked.